It’s astonishing how everything has fallen into place as we prepare for our home free life. The people who bought our house are cooperative and pleasant. Furniture is disappearing, cash is appearing, enticing travel plans are firming up. Our friends, family and random strangers are encouraging and enthusiastic about our plans. Even the inspectors, handy men and real estate people are behaving themselves. There’s only been one really painful trauma: finding the right home for our precious Sparky. 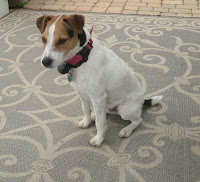 We bought Sparky, a pure-bred Parsons Jack Russell terrier, a year and a half ago.   Our daughter Alexandra found a breeder who was known for his mellow terriers.  Sparky (Tim named him instantly and he got it just right)  slept in my lap all the way from San Jose, a three hour journey.  He settled into his little bed in the kitchen and accepted our adoration and a toy monkey immediately.  Friends and family came to call and view and cuddle the new baby.

Then began the regular round of puppy maintenance and doctoring:  inoculations, the interminable two month wait for the risk of the deadly parvo virus to to pass so he could actually go out in public.

And of course, neutering, after which he moped pitifully for ten days wearing a lampshade to protect his little privates from infection. 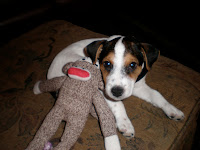 Sparky and his Service Monkey

Through it all he was learning to be a great dog.  His “cousin” Kirby, a five year old Jack who belongs to daughter Alexandra and her family, taught Sparky that squirrels were for chasing and sun spots were for sleeping.  He also instructed Sparky in the fine art of tug-of-war, guarding one’s toys from all other dogs, and seeking the company of one’s humans at all times.

Slowly the shoe chewing, sock-stealing, paper shredding and flying escape attempts through all open doors resulted in a semi-trained, very happy dog.  A wireless electronic fence finally controlled the flight risk and Sparky settled down to became the master of his universe.  The two feral cats we feed learned the perimeters of Sparky’s electronic fence quickly and amused themselves by staying just beyond his reach, teasing and torturing him.  He spent his days patrolling his property and rushing out the door twenty times a day trying to catch one of those monsters. He never did.

Dog park visits were riotous because Sparky believed he was a large dog.  He only played with the big boys and would have packs of big shepherds, massive labs and king-size poodles chasing him madly around the park. He’d run until he got tired of it and simply leap on the back of one for a little joy ride or  somersault over their backs and be on his way to find a ball.

We knew that letting Sparky go would be wrenching and finding him just the right owners would  be tricky.  We were so right. Two prospects who passed our stringent tests committed to taking him  but backed out at the last moment and a third, who actually took our boy home, turned out to be not the person we had hoped to find. He came home after spending three days in a frantic household and it took all three of us several days to get over the trauma.

And then our luck began again. Sparky’s new people appeared, sent by a friend’s friend. It was like finding a mate – the one introduced by a friend generally works out best. The people owned five terriers and wanted another. The instant they met, the three of them were pals. They brought one of their big burly terriers in our house and after the obligatory posturing the two dogs settled down to become buddies.

Two days later we trundled Sparky and all his gear – crates and electronic fence, toys, food, blankets and leashes to their house.  His new daddy waited in the drive and Sparky ran to him right away. In seconds he was off to sniff and leap his way around the huge property, propelled by his insatiable curiosity and the mad desire to end the life of some small creature. The humans settled down for a cool drink on the patio while himself inspected every inch of the area, sniffing dog smells, finding toys and searching for a victim. He stopped long enough to put his paws on my knees, his tongue lolling as he panted and grinned.  His eyes said “Mom, mom, can you believe this place?  I’m having the time of my life. Look, Mom – lizards, ground squirrels, balls…pant pant pant.” And he was off again. 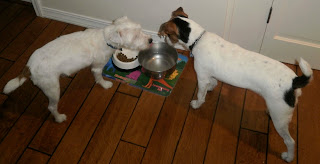 He did not notice when we drove away. By then he was in the company his new siblings, who were initiating him into the family style of hunting.  We were told that within half an hour he was assimilated, had murdered his first lizard, and was learning the rules of the house.

Sparky’s new dad has sent two long reports about his progress. Our dog has demonstrated good manners, a happy nature, and the sparkling personality he’s always had.   He’s keeping up with the other dogs and has blended into the pack. Since these people live in a 5,000 square foot house at 1700 feet overlooking the wine country of Paso Robles, I’d say Sparky did pretty well!

We miss him terribly but we think of him and smile because we know he’s having fun, and will be cared for and loved. Five brothers and sisters, an endless supply of critters to eliminate, sleeping in the master bedroom with his siblings and alpha people and daily rides in the truck wherever his new daddy goes will give him a life of pure joy.

Now we’re off for ours!

2 Responses to "Sparky the Wonder Dog"