Tim and I have been in training for home free living for years and didn’t know it. Each of us has rented holiday houses with family and friends at the beach, in the mountains, or in the desert many times. Since he and I began our restless journey together several years ago we have plopped ourselves down in other peoples’ digs in many states and several countries. Some experiences have been terrific, others, which you know if you’ve followed this blog, not so much.

Even though we’ve had a few losers, for the most part rental units make us happier than hotels. Apartments, cottages or even studios offer more room than we can afford for extended stays in hotels.  Sometimes there are two baths, which is nice, we can usually find exterior access of some kind like a little balcony or terrace, and renting a place gives us opportunity to try living with actual locals who are living their actual lives around us. Best of all, we get to have a kitchen.

We have discovered that one person’s idea of a kitchen may vary dramatically from another’s.  As we peruse rentals worldwide via the internet for our future we find ourselves zooming in to make hard-eyed inspections of the burners, counter space and the presence or lack thereof of an oven and/or microwave.   Some people think that a hot plate, a bar sink and an under-counter refrigerator with Barbie-sized ice trays constitutes a kitchen.  I am not one of those people.

KITCHENS IN OUR FUTURE

Now, mind you, I do not have notions of grandeur.  A family-sized granite-topped, six burner double oven job with a 25 cubic foot refrigerator is not my idea of a great time any more.  I have no intention of producing Thanksgiving dinner in Portugal or

I adore cooking and have had some terrific fun in some strange kitchens.  Years ago when I lived in Ireland,  I almost single-handedly served a sit-down turkey dinner from scratch for twenty displaced Americans.  It was fun, but I don’t believe I’d do it again.  Finding yams in that country was a true challenge.  I once made dinner in Spain in a house that was built in 1609.  The kitchen hadn’t been updated since then except for the running water in the sink, so I had the pleasure of cooking on a wood stove. I don’t remember exactly what I cooked or how it turned out because I had consumed a good deal of excellent Spanish wine while preparing it, but I DO remember how  fun and romantic it was.

Then there was the whole piglet we roasted  in San MIguel Allende, Mexico, with Reed Hearon, a fantastic chef from San Francisco who became our pal for the summer.  We had a great time in a kitchen the size of a large closet without benefit of much equipment except his good knives and fabulous talent. He was a very patient teacher.  The kitchen was so small that he managed to catch his shirt on fire – but that’s another story.

Through the years I have learned that rental kitchens usually have the basics like  a spatula, a couple of mixing spoons, an impossibly cheap, useless can opener,  a vegetable peeler left over from the owners’ great grandma’s kitchen, a few mismatched dull knives poked into one of those hulking on-the-counter knife blocks, some mixing bowls, and if you are very lucky, a few decent pots supplemented by the kind that belong on a camping trip.

EXAMPLES OF PLACES WHERE THE BLUE BOX EARNS ITS KEEP!

There are usually basic appliances, too, which include a lightweight plastic coffee pot, a blender that’s made too many margaritas, and a mini microwave crammed into an unreachable corner.  Stoves can be a challenge – especially the electric ones, which I have never understood.  Some gas ones don’t have enough oomph to warm up a cup of soup in less than a half hour.

Are you feeling dispirited yet?  Cheer up because there is an upside to this dismal picture.  After years of finding myself in someone else’s inconvenient kitchen and eventually getting so hungry for my own home cooking that I was willing to work without a net, I came up with my essential portable tool box. It contains things I rarely find in a rental kitchen and always want.  It all fits in and old plastic shoe box  with “New Navy Pumps” scrawled  on the end.  If there’s no room for the box, we spread the contents among our bags.  The whole business weighs almost nothing and takes up very little space.

THE BLUE BOX AND ITS CONTENTS 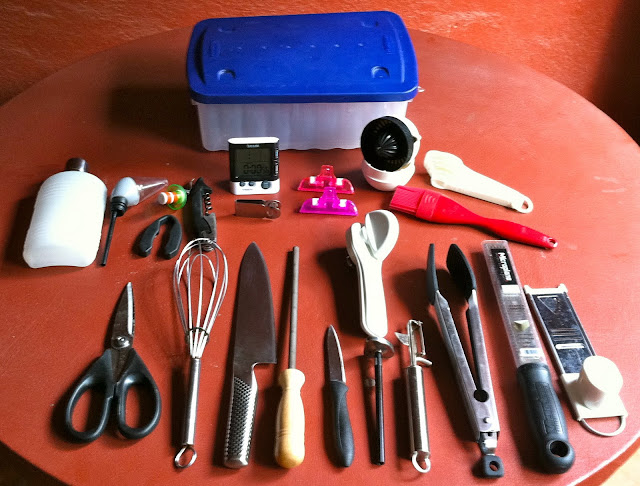 Of course, dragging cookbooks around is impossible, so I’ve learned to rely on the internet.  I use http://www.myrecipes.com often and have developed a decent library of recipes we like which are saved on that site.  I’m also hooked on http://www.cook’s illustrated.com because I can’t get the physical magazine now.  I sprung for the pricey  on-line subscription plus access to all of their book and video products, which makes me very happy.  I can set up my Mac in any kitchen and follow the recipe for whatever I’m doing.

OUR KITCHEN NOW THROUGH SEPTEMBER

I am wildly inspired and will be cooking like a crazy person the whole time we are here.

Getting those four big burners going all at once is a thrill to people who really like to play with their food!  Marta, who runs this household, has promised to help me learn much more about Mexican cooking and I will be her avid student.  Mole and red sauce, here I come.

Since this kitchen is so well provisioned,  the blue box is temporarily retired, but its contents will be going with us to Buenos Aires in October and on to Europe next year.  Who knows what we’ll need in Berlin, Paris, Italy, Spain and Portugal?  Stay with us and we’ll learn together.

3 Responses to "The Kitchen – The Heart of a Rental"