I allowed my two beautiful daughters to survive their terrible teenage years, and they have grown into capable, strong women whom I admire greatly and love deeply. I live near them and their families, so we see each other often and speak nearly every day. They are discreet and patient as they watch me search for words and forget appointments, but we do talk frankly about what’s essential to their dear mother – my appearance. The girls and I have some pacts concerning this topic, and I depend on them to follow my instructions when I’m no longer in charge. I admit that vanity is among my many shortcomings. For instance, if I’m stuck in a hospital bed or nursing home, I’ve asked them to tame my fluffy little mustache and buy me pretty nighties.

If I should die suddenly, they have promised to march into my house with large plastic trash bags and dispose of my messy dresser drawers’ contents.  Not only are my things jumbled, but my shabby underwear (who’s to see it now ?), and other items long past their prime, must be removed before a cleaning person or well-meaning friend rifles through the drawers. Oh, yes, the bedside table items must go, too, due to their private nature. One of these days, I’ll clean up my act so they can get on with mourning me instead of policing my dark secrets.

Many of my contemporaries have dispensed with time-and-money-consuming habits that almost all have practiced for decades. I wish I could follow their lead, but vanity is one of my many character flaws. Even at 81, I’m still concerned with my appearance. I still spend money and time on my hair and nails, and I love clothes. These are hard habits to break, and I’m concerned that my vanity might show like a slip that’s too long.

I guess my fixation results from being a professional woman in Los Angeles. I spent thousands on hair cuts and color and silk-wrapped nails for many years. I owned a PR company representing actors, TV shows, and films, so I justified my expenditures in the name of the hipness that tinsel town required.

In the ’70s, one of my actress clients convinced me to go all out and visit one of the big-name hairdressers whose eponymous salon was in the heart of Beverly Hills. He was so over-the-top that he had not one but two assistants hovering around his chair at all times. I was ushered into the glowing all-white and silver salon by an alarmingly thin and condescending young woman. I had the urge to remind her that I was paying more for this cut and color than she probably made in a week. But, of course, I meekly allowed her to take my coat and lead me to the “color room.”

A lithe young man with a ponytail applied goop to my hair, and as I waited for the magic to happen, I spent the hour ogling the Beverly Hills dames whose shoes and bags were worth more than my car. Finally, they escorted me to the maestro’s cubicle.

A TV blared with a Dodger’s baseball game on the gorgeous marble countertop. The grandmaster, a short Asian man full of attitude, swaggered in. He spoke to me between glances at the screen and half-listened to my description of the style I wanted. At the time, my hair grazed my shoulders, and I told him that I would like it to be chin-length, perhaps in an angled bob. Still looking at the TV, he grabbed a pair of gold scissors a minion presented like a nurse. Then he whacked off a big chunk of my hair just above my ear! I was so shocked that I could utter only a tiny squeaking noise in protest. I slunk out of the joint a hundred dollars lighter with a pixie haircut never meant for a 5’9″ woman with a long face. It took a lot of explaining to get back into the good graces of my talented hairdresser in Studio City. He forgave me and never watched TV while he saw me through the awkward stages of growing out that choppy haircut into the look I wanted.

When I entered my fifties, it became difficult to see myself accurately. As my body aged, I still peered at the world from a 35-year-old perspective. Although things seemed the same from the inside, the mirror told different story. Perhaps this phenomenon explains why it’s hard for me to judge how I actually look. I’ve asked my children to help me avoid the pitfalls of this skewed vision. They swear to tell me if I’m starting to fall into the trap of what the Irish call “mutton dressed as lamb,” meaning older women who dress as they did forty years ago or try to keep up with trends that make them look ridiculous.

I’ve given up believing that a dark tan will conceal my crepey skin, and I resist the urge to try today’s return to the false eyelash craze of the ’60s. But I still cling to my ancient Pendleton jackets, and I sport the same bob I’ve worn off and on since the debacle in Beverly Hills. Now it’s silver, not blonde, which I think is flattering. I don’t imitate the big hair of the ’80s or wear shorts, so people aren’t forced to see my wrinkly knees. My nails are coated with gel, and I probably wear too much make-up for an old broad. But the daughters haven’t called me on any of this yet. So I guess I’m doing well so far – at least I’m mutton dressed as mutton. 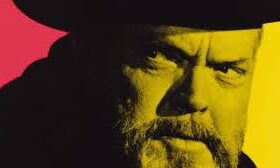 Faking it with Orson Welles