Re-homing the dog, selling the house, dumping furniture, books, clothes and keepsakes, moving out and trying to restore tattered relationships with our children after our shocking decision to bolt were mere child’s play. The real challenge was the electronics.

Tim’s clunky desktop computer and its ugly hard drive were plunked next to the only internet connection in the rental house. Unfortunately it’s located on the kitchen pass-through, which also affords the best view of the ocean. The phone base is there, too, with its little answering machine flashing away. There is no wifi, so we added our router to the mess so the laptops would work.  About 10,000 cords litter the wreckage that’s supposed to be a counter top.  You  Luddites sit tight.  This part is almost over.

My fancy new MacBook Air, which we recently acquired, floats around the house, as does Tim’s handy wireless notebook but  the dining room table is adorned with a huge 17-inch IMAC, which I had to bring along to complete a photo project I’d sworn to produce before I left the country.  We also have a big old printer and a small new scanner.  What is WRONG with us?

I don’t even want to talk about the cell phones, digital camera,  Flip video camera, IPod, Bose IPod speakers and two Kindles which have chargers, reading lights and other accessories.

The problem was obvious: how to maintain contact with our loved ones and friends, have the ability to make transportation and housing arrangements while on the road, provide ourselves with entertainment and reading material,  have two word processors, and still have enough weight allowance and space for clean underwear.

We have wrestled with this monster for weeks.  Daughter Amandah, the tech-wizard, has campaigned vigorously for the IPhone.  We have resisted strenuously and some heated conversations have at times strained our otherwise serene relationship with her.  Tim spent days talking to nine-year-olds at Verizon and AT&T about their impossibly confusing data plans and equipment recommendations and ended each session more confused and frustrated than ever.

During this drama we began frequenting the Apple Store so I could attend classes about my MacBook Air and innovations like MobileMe and Cloud Computing.  Tim generally glowered in the corner while I yukked it up with the savvy techies and other newbies who were wowed by every astonishing revelation.  He maintained that all Apple people (customers and “geniuses” alike) are a smug, exclusive, snooty bunch of nut jobs.  As a PC guy, he found the whole Apple business off-putting and silly.

One day as Tim was lurking in the Apple Store perusing the expensive add-ons while I plowed through yet another class,  he found John.  They began “the talk” about phones and apps and international service plans. We left the store with two spanking new  IPhones. They were up and running before we walked out and within minutes we had invested in several new apps. 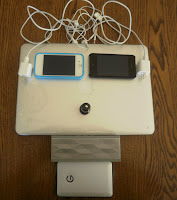 An Apple Smiley Face –
ALL of our equipment for the road

Our mission was accomplished.  We no longer need cameras, maps, GPS devices, an IPod, or even our Kindles and the accessories each of them required.

Since our IPhone purchase, vast blocks of time have evaporated as we grunt, groan, giggle and tap away with our gorgeous new toys. We’ve attended IPhone classes and cannot escape the Apple store without spending hundreds on must-have goodies.  We are currently searching the internet (on the IPhone, of course) for a twelve-step program for Apple junkies and have sworn never to enter another brick-and-mortar Apple establishment again.   Of course I would not consider giving up my Kate Spade computer case, my snappy aqua IPhone cover or our ultra-slim 500 gig Portable USB drive for anything.

If I can just find the perfect pair of shoes to complement the Kate Spade I’ll be ready to leave the country!